ENHANCER OF VAGINAL ANATOMY
LASER IS THE PAST. DISCOVER THE FUTURE OF FEMININE CARE

EVA™ is the first device in the world that uses the exclusive technology VDR™ (Vaginal Dynamic Radiofrequency), developed and patented by Novavision Group R&D Department together with the main Italian Universities. This technology will change the ways of feminine care.

How Does It Works? 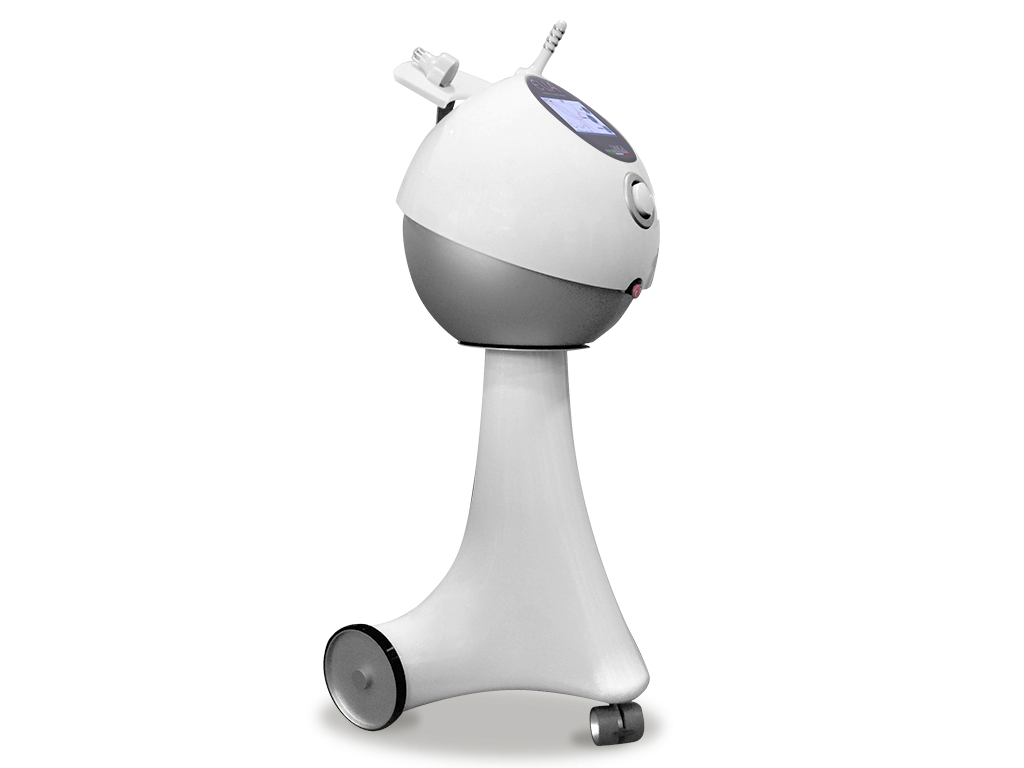 The ergonomic hand pieces are equipped with 4 specific electrodes that allows to constantly monitor the temperature progression to reach the optimal level one in each point. This special feature can automatically shut-down the energy emission avoiding any possible risk.

Vaginal atrophy is a common medical condition among women that are going through that particular period of physiological changes that is menopause.

As time passes by the vulvo-vaginal tract is affected by the natural decline in estrogen production, which often causes symptoms such as: the fragility of the vaginal mucosa, dryness, itching and burning, pain during sexual intercourse (dyspareunia).

The mucosa, already heavily weakened in its structure, presents fibrocytes unable to produce collagen, hyaluronic acid and other substances necessary to maintain the right level of epithelial development.

Therefore the vaginal environment is dehydrated, embrittled and more subject to recurrent infections. The nutrients and the defensive action of lymphocytes, in a dehydrated connective tissue, does not manage to reach up to the epithelium, that keeps on getting thinner.

The exfoliation of surface cells is reduced, thus causing the decrease of glycogen, the main nourishment of lactobacilli that mantain the acidity of vaginal pH, protecting the environment from infections.

The EVA™ treatment favours functional recovery of metabolic activity through the localized temperature increase, stimulating the synthesis processes of collagen, hyaluronic acid and the ground substance, as well as inducing neoangiogenesis, restoring the tissue development and balance of the flora bacterial.

The Genito-urinary Syndorme of Menopause, also known as GSM, includes a variety of disorders and symptoms prevalent among aged women.

More than 800 million women worldwide daily face this condition with all the annoyances that involves.

Because of the progressive lack of estrogen the vaginal tissues undergo a progressive thinning with loss of lubrication favoring the appearance of vaginal dryness.

The dryness is only the tip of the iceberg of a number of chronic disorders which, if not treated, tend to worsen with time. Often along with the dryness women complain about localized burn, white discharge accompanied by urinary symptoms like urgency, infections and post-coital cystitis.

Lack of lubrication, not only basal but also after stimulation, worsens the quality of sexual activity with painful intercourse (dyspareunia) sometimes associated with bleeding. If untreated vaginal and urethral mucosa can easily submit microdermabrasion and hypersensitivity to pathogenic biofilm that progressively weaken the structure.

Accordingly the vaginal submucosal, vulvar and urethral, normally rich in elastic fibers tend to cause stenosis and incontinence problems.

In addition the vaginal, vulvar and perimetric blood vessels tend to shrink, resulting in a drastic decrease of the mucosal nourishment, but also a progressive decline of response to stimulation, which in many cases lead to orgasmic dysfunction if not in anorgasmia.

EVA™ offers a real alternative to the most common hormonal therapies, thanks to a proper targeted and controlled thermal stimulation, which triggers and promotes blood microcirculation and tissue tropism to restore the natural balance of the vaginal environment.

Vaginal laxity is caused by the loss of muscle tone and strength of the pelvic structures, as well as by the reduction of the tissue elasticity at vulvo-vaginal level.

Among the main factors responsible for the occurrence of this condition is natural childbirth, especially if done in old age or repeated in a close time.

The tissue and muscles stretching produced by the passage of the baby through the canal is a stress that keeps the structures from finding again their characteristic elasticity even for a long time after childbirth.

Older women, who have given birth more than once, may suffer from more disorders due to the natural decline in collagen and elastin production caused by the passage of time. The relaxation of vaginal tissues decreases – for both parties involved – the sensivity during sexual intercourse, making it less satisfactory and therefore affects the intimate couple’s life.

This same tissue changing is very often cause of stress urinary incontinence, precisely for the loss of tone of vaginal muscles which affects the voluntary urethral control.

With EVA™ the damaged vaginal tissues are stimulated in a targeted manner reactivating locally the metabolism of fibroblasts and triggering the neocollagenogenesis process, as well as the production of hyaluronic acid and glycosaminoglycans by returning tone and elasticity to the tissues.

Involuntary loss of urine even after common daily actions, such as lifting heavy objects or a cough or a jump, is source of embarrassment and discomfort for women who are affected by it.

The mild stress urinary incontinence is often associated with the natural aging process. But even many young women especially after maternity may have experienced this disorder.

The pelvic floor and the vaginal walls in fact are particularly affected by the hormonal changes and the mechanical stress of pregnancy but also the more or less deep trauma related to the childbirth.

The weight of the baby and birth conditions affect in a decisive way the appearing of micro tears that limit the muscles retention capacity and the whole tissue.

The thermic effect of EVA™ with direct action on the muscles polarity and the tropism of the mucosa, provides a new urethra support and strengthens the walls of the pelvic region in a few sessions and with no annoyance and side effects.

Among the aesthetic medicine practices the vulvar rejuvenation is one of those in which there is greater constancy of growth.

More and more aware of their own femininity and eager to feel comfortable even in the privacy at any age, women decide to undergo treatments for vulvar rejuvenation.

The aging of the internal but also external genital tissue is an inevitable process that is accelerated with the disappearance of the menstrual flow. If not properly treated, the tissuestend to weaken and to become atrophic.

The labia majora lose elasticity and tone and appear “empty”, the clitoris is reduced in its size and sensitivity, and the clitoral corpora cavernosa gradually lose its function reflecting the effect of aging.

The VDR™ (Vaginal Dynamic Radiofrequency) is the exclusive technology, developed by the Novavision Group in collaboration with the main Italian Universities, that takes care of female genital sphere with gentleness.

The targeted and focused action of the energy flow acts reaching only specific layers of vaginal and vulvar tissue to treat, by generating heat exclusively where is necessary.

In comparison with the traditional devices, the innovative automatic system of energy management supplied to the tissues vehiculates the right level of energy to avoid overheating and burns, preserving the balance of surrounding layers.

This technology allows to treat the most common vulvar and vaginal symptoms caused by  tissue traumas such as childbirth, or by physiological changes due to menopause, such as vaginal dryness, dyspareunia or mild stress urinary incontinence. All of it, in the most safe, comfortable and effective way.

The safety system RSS™ enhances the features of VDR™ technology.
Thanks to the action of 4 temperature sensors operating simultaneously it checks the progression to reach the best heating level.

Every handle is equipped with a movement sensor that controls every operator move avoiding any harmful administration of heat. In case RSS™ reveals any overheating and/or any wrong execution of the procedure, warns the operator with acoustic and visual signals, up to block the energy emission, if necessary.